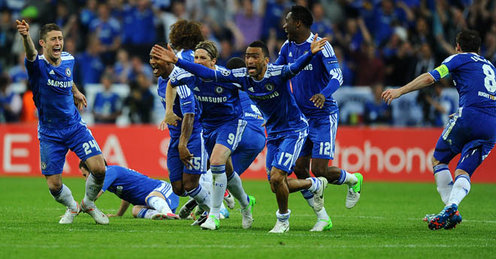 In 2010, Chelsea was second only to Manchester United (£764 million debt) as the worst offender when it comes to debt in English football, owing its creditors a staggering £736 million, and is thus responsible for almost ¼ of all debt in the Premier League, but after just two years, the club is debt-free.

Chelsea had a profit of 1.4 million pounds ($2.2 million) in the financial year to end-June 2012, compared with a loss of 67.7 million pounds a year earlier, making it the first time the club will declare profit since Russian oligarch Roman Abramovich bought the soccer club in 2003.

Even as Barcelona were celebrating the Champions’ league triumph last year, they were £400m in debt, but the reigning Champion of Europe is debt-free.

Chelsea also won the English FA Cup last May as well as the UEFA Champions’ league and their successes helped to increase turnover by 15 percent to 255.7 million pounds, which the club said made them the fifth largest club in Europe in terms of revenue.

Abramovich converted 166.6 million pounds of debt into equity over the course of the year, making Chelsea debt free. United fans complain that interest payments on the club’s debt make it harder for them to compete with rivals.

Profits of 28.8 million pounds made on transfer dealings helped Chelsea to return to the black.

High-profile departures from Chelsea last season included Alex to Paris St Germain, and Yuri Zhirkov who went to wealthy Russian team Anzhi Makhachkala. Chelsea signed Gary Cahill and Juan Mata in the period but such transfer costs are spread over several years depending on the length of their contracts.

Summer signings including Oscar and Eden Hazard were not included in the latest set of results, a club spokesman said.

A Chelsea statement said: “The £1.4m profit contrasts with a loss of £67.7m in the previous financial year and puts the club in a strong position to comply with UEFA financial fair play criteria for the coming seasons.

“The club also enjoyed an uplift in revenues from commercial activities including new partners and merchandising.”

The statement added debt of £166.6m was turned into equity during the course of the year “making Chelsea FC plc debt free”.

Chelsea chief executive Ron Gourlay said: “Our club philosophy is built on success. We had that success on the field this year, as we were the first London team to win the UEFA Champions League, and we enjoyed it off the field as well and this helps us inject financial investment into the team.

“The big challenge is always to have a successful team on the field that wins trophies and to make a profit at the same time.”

Manchester City is another club with a wealthy owner and a huge debt. But no one can blame them for spending so much on players. The crucial goals for City were scored by strikers who cost more than the annual turnover of nearly half of the other clubs they play against. To paraphrase Arnold Palmer, the more you spend on the best players, the luckier you get.

However, with the looming introduction of financial fair players rules by European football governing body UEFA designed to ensure clubs in continental competitions break even, clubs like City have a lot of work to do. Chelsea has shown it is not impossible to get out of debt and still have worldclass players.