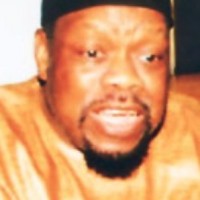 Today marks a year since the death of the Igbo warlord and general of the Nigerian Army, Dim Chukwuemeka Odumegwu-Ojukwu. His family yesterday (Sunday) attended a Holy Mass service at the Michael De Archangel Catholic Church, Umudim, Nnewi, Anambra State to mark a year anniversary of the departed Igbo leader.
Ojukwu died on November 26 last year in a London hospital after he was sick for about one year. The one year memorial church service was, however, not like the burial of the late former national leader of the All Progressive Grand Alliance (APGA) held in the same church on March 2 this year as the service yesterday was attended mainly by members of the Ojukwu family, their friends and the Movement for the Actualization of the Sovereign State of Biafra (MASSOB) members.

Of course, Ojukwu’s family has been bedeviled by waves upon waves of crises and conflicts since the death of their patriarch. Certainly, he will sorely be missed by the family.

But another issue to considered is this: is the absence the leader of the secessionist Biafra group felt by Nigerians?