Succour came the way of flood victims on Thursday when the presidential committee on Flood Relief co-chaired by Africa’s richest man, Aliko Dangote and eminent lawyer, Olisa Agbakoba (SAN) raised about N12 billion in the first leg of its fund raising initiative. 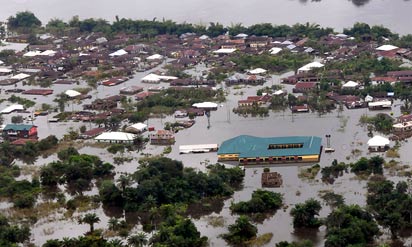 The 34-man committee had set N100 billion as its ultimate target.

Both Mr Dangote and the Federal Government donated the sum of N2.5 billion each, making them the highest donors at the event held at the Banquet Hall, State House, Abuja.

The Ministers of Petroleum and Communication Technology pledged to mobilise the IOCs and telecommunications companies respectively, to respond to the donation.

Meanwhile, President Goodluck Jonathan has announced tax incentives for all corporate organisations that donate into the flood relief fund to alleviate the sufferings of Nigerians who were affected by the recent flooding in the country.

He made the announcement at a fund raising dinner organised by the presidential committee he set up to cater for the needs of the flood victims.

The president also used the opportunity to launch the website for the fund-www.nigeriafloodrelief.org