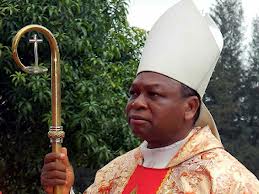 Senate President, David Mark, is to lead an official delegation put together by president Goodluck Jonathan as representatives of the Federal Government at the formal consecration of Archbishop John Onaiyekan as a Cardinal of the Catholic Church by Pope Benedict XVI at the Vatican tomorrow.

This was confirmed by a statement signed by the special adviser to the president on Media and Publicity, Dr. Reuben Abati.

It will be recalled that Archbishop Onaiyekan’s elevation to the College of Cardinals was announced by the Vatican on October 24, this year.

In the same vein, the President has also mandated members of the delegation to stop over in Hannover, Germany on their way back to visit Governor Danbaba Suntai of Taraba State who is receiving treatment there for injuries sustained in a plane crash last month.

The delegation which is scheduled to leave Abuja today is due back on Sunday.