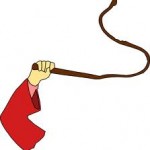 We have known that to spare the rod, spoils the child therefore, Nigerians do not use it sparingly. Some may say that is a sweeping generalisation of Nigerians, but the culture lends to forefathers having beaten children and this norm has been passed down to the present generation and beyond. In England, common law allows parents and others who have “lawful control or charge” of a child to use “moderate and reasonable” chastisement or correction. Beating children is frowned upon, but spanking isn’t. I have spoken to many Nigerians in my age group (40 something)  some say the beatings fitted the behaviour, others mention their experience being tantamount to abuse others were not allowed to be beaten at school or home. Whatever the case, from childhood until present do the beatings in childhood make lifetime impressions?

As a child I was heavily beaten by my mother. It made me angry when I was younger, tending to do the opposite of what was required to be done and I waited for my beating. I had a very stubborn character (it made me worse) and I learnt that a beating was the greatest that could happen and I’d survived many!  Because I detested being beaten so badly as a youngster, when I started having my own children although they got a spanking, they were always given a reason, it was never done when I was angry and it was only meted a handful of times. I normally would take away privileges or get them to ‘raise their hands and close their eyes for a period of time’. Overall, I think that it has made me a good person today as It made me realise (in my life) it wasn’t the way to go.   Like my father, I believe words have a far greater effect than losing ones rag and battering a child for small misdemeanour’s.

Some that have been beaten as children (on the level of child abuse or less), throughout their life do not have a close relationship with the offending parent. Instilling fear in your children is never the way to be a good parent!  I wonder, does a beating ensure that the child never repeats the corrected behaviour again? For example, those beaten for late attendance as children do they ensure at all costs that they were never late for anything in later life? Is a beating an effective way to handle future misbehaviour?

Can you beat bed-wetting, shyness, spoiled behaviour, thumb sucking etc from a child, and not see any recurrence of these actions in them as the years of their life roll on?