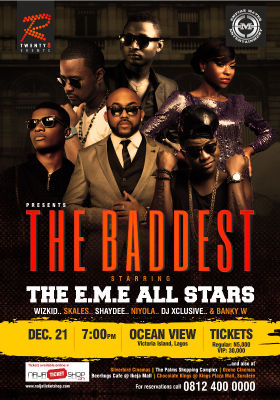 Nigeria’s busiest music crew in 2012, Empire Mates Entertainment, EME, has announced that they will cap their activities for the year with a mind blowing live-in concert aptly tagged, “The Baddest”.

The concert which will hold on Friday, December 21, 2012 at The Grounds, Ocean View restaurant in Victoria Island, Lagos will have the EME superstars led by R&B supremo, Banky W and internationally acclaimed pop sensation, Wizkid thrilling music lovers with some of their greatest hits of 2012.

According to the EME boss, “The Baddest concert is a very special gift to our fans for all the support they have shown us throughout the year.”