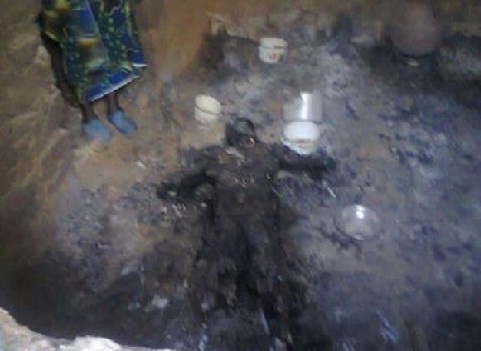 Hundreds of youths yesterday protested the alleged killing of six members of a family at Maduachi village in Zonkwa area of Zangon Kataf Local Government in Kaduna state by suspected Fulani herdsmen.

The youths carrying green leaves matched through the heart of the town, condemned the killing of the members of the family.

According to an eyewitness, the gunmen numbering about 20 invaded the village and shot sporadically into the air for over 30 minutes before entering the family compound of the victims to kill them.

National President of Bajju Youth Association, Gad Ezekiel, in his account said the attackers killed all the members of the same family, leaving behind a little girl with bullet wounds.

The Chairman of Zagon Kataf Local Government Area, Mr Dominic Yahaya confirmed the incident saying: “The attackers came in the early hours of today (yesterday) and shot the family of one Yakubu Kayit. They killed members of the family and burnt their corpses. A little girl with bullet wounds was the only survivor.

“There was really tension here when the youths came out in large numbers this morning and protested the murder. It was a very tough task calming them down. I am told that the attackers are being trailed. It was indeed a gory sight to see these corpses,” Yahaya said,

Another resident of the area, Emmanuel Danboyi, said the incident allegedly happened at about 11p.m.

He said: “In the day time, we saw a trailer parked but at about 11p.m. when we had gone to bed, we began to hear gun shots for several minutes. By then, I had to evacuate my family to a safe place. Later, we discovered that all the people in the house had been killed and burnt beyond recognition.“

State Police Public Relations Officer, Deputy Superintendent Aminu Lawan, while confirming the incident on telephone, said investigation had commenced, adding that no arrest had been made.

Condemning the killing, Governor Patrick Yakowa of the state described it as saddening. Yakowa spoke through his Senior Special Assistant (Media), Mr Reuben Buhari in a Government House statement.

“The Governor of Kaduna State is truly saddened by the gory incident of Wednesday 14, 2012 in Madauchi, Zangon Kataf Local Government. But even in the face of such unwarranted and deliberate attempt to incite and create chaos, the state government will not be deterred in its quest of ensuring a secured and united Kaduna State.

“The state government, while totally condemning the killing as an act of barbarism, sympathized with the families of the departed, His Highness, the Agwam Bajju, Mallam Nuhu Bature, the Local Government Council and the entire people of the state,” the statement read in part.