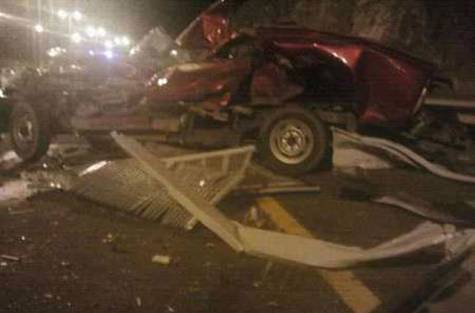 A UAE official has reported the death of eight Emiratis, including a one-year-old and five siblings of the Al Derey tribe from Al Ain who were killed in a three-car collision on the Sohar-Buraimi Road late Thursday night. A 22-year-old Gulf Cooperation Council, GCC national, a woman, also died in the crash.

Colonel Hamad Nasser Al Beloushi, director of external roads and traffic at the Abu Dhabi Police Traffic and Patrols Directorate, said the bodies were transported to Al Ain and were buried on Friday.

“It was a freak accident,” an eyewitness told newsmen from Sohar. The eyewitness said the accident occurred when power generators slipped off a Saudi-registered trailer truck and fell on the road going in the opposite direction.

“The truck swerved near Oman Mining Company and the power generators slipped and fell on the other side of the road,” the expatriate said on condition of anonymity.

“The three vehicles hit the power generators at high speed,” the eyewitness said, adding that two of the vehicles were registered in the UAE.

Lieutenant General Shaikh Saif Bin Zayed Al Nahyan, Deputy Prime Minister and Minister of Interior, has conveyed the condolences of President His Highness Shaikh Khalifa Bin Zayed Al Nahyan to the Al Derey tribe who lost 8 of its members in a horrific road accident in Oman.

Shaikh Saif expressed Shaikh Khalifa’s sincere sorrow for the great loss and asked the Almighty for patience and solace. [GN]