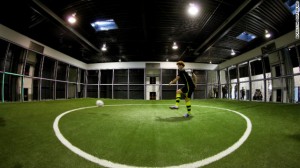 German champions Borussia Dortmund are boldly going where no club has gone before with the “Footbonaut”, a soccer training machine powered by a smart phone.

Winners of the Bundesliga title in each of the last two seasons, Dortmund has unveiled the 14-meter cage which is the brainchild of Berlin-based designer Christian Guttler.

Once inside the “Footbonaut”, a player is fed balls by eight different machines, having to find one of the 72 panels – – lit by a flashing green light — which make up the space-age contraption before receiving another ball.

Dortmund hope the device, which can also be operated using a tablet, will improve a player’s technique, spatial awareness and peripheral vision.