Buruji Kashamu, a stalwart of the Peoples Democratic Party in Ogun State, on Sunday, berated former president Olusegun Obasanjo over his criticism of president Jonathan’s handling of corruption and the Boko Haram insurgency in the North saying he lacked the moral rights to do so. 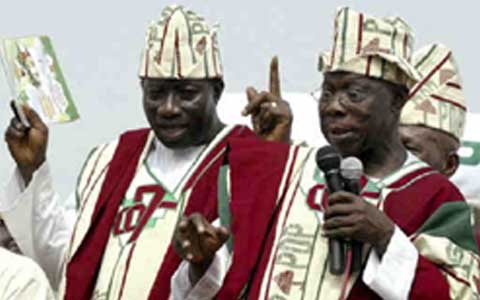 Both spoke differently against the backdrop of the recent statements credited to Obasanjo where he made veiled reference to Jonathan as a ‘weak leader’.

The former president had on the occasion to mark the 40th anniversary of Pastor Ayo Oritsejafor as a clergyman, criticised Jonathan’s handling of corruption and the activities of Boko Haram.

Kashamu, in a statement in Abeokuta said Obasanjo’s administration, which did not do better in tackling corruption and terrorism in its eight years, laid the foundation for the country’s current travails.

He said, “Perhaps, the point should be made – and poignantly too – that the earlier Obasanjo purges himself of his messianic postures, the better it would be for him and the nation at large. He is quick to recount his exploits while in office. But the truth is: the foundation of some of the challenges that we are grappling with today were laid during his last years in office.”

The PDP chief further accused Obasanjo of pursuing a personal and selfish agenda by his criticisms of the Jonathan administration.

However, Monguno, while speaking to journalists in Maiduguri, Borno State, on Saturday, posited that Obasanjo had no moral right to criticise Jonathan

He said, “Somebody who wanted to extend his tenure beyond the constitutional term; tried his very best to extend but was rejected, is now advising government to do the wrong thing”.

The former Petroleum Minister noted that Obasanjo’s prescription of military action the type  he unleashed on the Odi community during his reign in 1999 would only compound the problem.

Monguno said, “I do not agree with our former President that Jonathan should use force, or use the military to crush what they always call the Boko Haram.”

According to him,  even in the military, soldiers do not want to go to war unless it is absolutely necessary.

He noted that even  the United Nations does not use force in situations like this and advised Obasanjo to look back on his military and political way of life.

Monguno advocated the use of peaceful means in resolving the Boko Haram threat rather than use force.