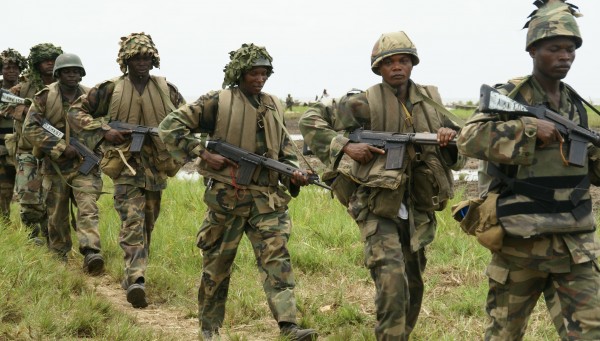 Gunmen said to be disguised as Nigerian soldiers opened fire on a pub in Barkin Ladi area of Plateau state, killing 10 people in a region already hit by waves of clashes between Christian and Muslim ethnic groups, authorities said Tuesday.

According to a military spokesman who denied soldiers’ involvement, the incident occurred late Monday when gunmen storm the pub then open fire indiscriminately on customers.

Barkin Ladi is a mainly Christian area of the region which lies on the fault line between the mainly Muslim north and predominantly Christian south of Africa’s most populous nation.

“The gunmen opened fire indiscriminately on customers, killing eight on the spot, while two others died later as a result of the gunshot wounds they sustained,” Captain Salisu Ibrahim Mustapha said.

“In protest to the killings, some members of the community barricaded the highway, preventing commuters from using the road.”

Some residents claimed the gunmen were wearing army uniforms, while a Christian activist from the Stefanos Foundation made the same accusation.

“There was an attack on a drinking spot in Heipan last night by five gunmen dressed in army uniform,” Mark Lipdo told AFP, referring to the neighbourhood in Barkin Ladi.

Mustapha however denied any soldiers were involved. Criminals have in the past dressed as soldiers or police to carry out crimes or commit violence.

Nigeria’s Plateau state has been hit by waves of clashes that have left scores of people dead in recent years. Policies favouring ethnic groups considered to be indigenous to the area have worsened the conflict.

The violence has often involved clashes between mainly Christian Beroms and Hausa-Fulani Muslims.

However, in addition to the ethnic clashes, Islamist extremist group Boko Haram has also carried out a number of attacks in the region as part of its insurgency.