The 27-year-old Portugal international spent six successful seasons at Manchester United before moving to Real Madrid, and described his former boss as his ‘father in football’ 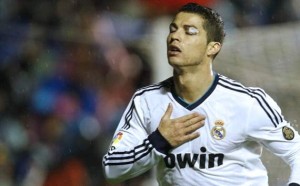 The 27-year-old now plays under Jose Mourinho at the Santiago Bernabeu after making a world-record transfer from Old Trafford in 2009 for an estimated €100 million.

And despite winning La Liga last season for los Blancos and scoring 46 goals in 38 league games, the Portuguese player revealed he remains fond of his former tutor, three years after leaving Manchester.

“[Ferguson is] a fantastic person. A human person. He taught me many things,” Ronaldo toldThe Sun.

“Like I said before, he’s like a father in football. I really miss him and my relationship with him.”


The United boss will be 71 later this year, but Ronaldo believes the fiery Scot is as motivated as ever.

He added: “He is very tough. I think he cannot be like that because, how old is he – 70? It’s not good for his heart.

“He’s still tough, strong, I remember him the first time I saw him he was with the same power.”


Ferguson signed Ronaldo from Sporting Lisbon in 2003, and nurtured his prodigious talent to the point where the winger was awarded the Ballon d’Or after scoring 42 goals in all competitions in the 2007-08 season.

The 27-year-old won the Premier League, FA Cup and Champions League during his time at Old Trafford, as well as the Fifa World Player of the Year award in 2008.

The forward has already scored 12 goals in 11 league appearances so far this season, but Madrid currently sit eight points behind La Liga leaders Barcelona as they look to retain their title.