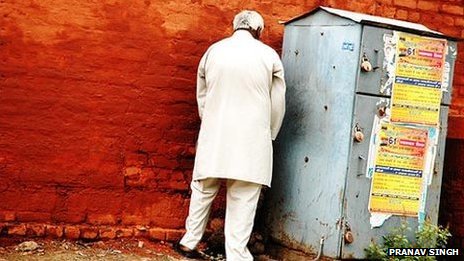 Officials of the western Indian state of Rajasthan has said volunteers armed with drums and whistles are being used under a new scheme to shame people going to the toilet in public in the state.

The scheme was on Monday launched in 34 villages in Jhunjhunu district.
Four to five people will “shout, beat drums or blow a whistle” if they see anyone urinating or defecating in the open, an official told the BBC. Repeat offenders may even be asked to pay a fine, he said.

Reports say nearly half of India’s 1.2 billion people have no toilet at home and they defecate in the open.
According to correspondents in the country, spitting, urinating and defecating in public are a common sight across India, and in rural areas many people continue to go out in the open even when they have toilets at home because they prefer the outdoors. But the authorities in Jhunjhunu now want to change that behaviour.

“Nearly 80% [of] villagers in the district have toilets at home and we’re trying to motivate the remaining 20% to build toilets at home,” the head of Jhunjhunu district council, Ramniwas Jat, told the BBC.

Officials say cultural and traditional factors, a lack of education and too few toilets are the prime reasons why millions of Indians defecate in the open.

Those with no access to toilets have to go to farms and fields and women have to go before dawn or after dark in order to preserve their modesty.

Last year, in Madhya Pradesh a newly-wed woman left her husband’s home two days after her marriage because the house had no toilet.

Defecating in the open is also blamed for the spread of a number of diseases such as tapeworm.[BBC]