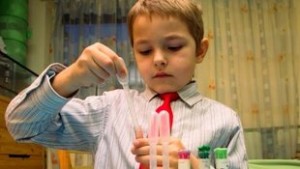 Many a proud parent has deemed their child bright, advanced and more intelligent than his or her peers. But how can parents tell the difference between their kid being smart or gifted?

According to child psychologist Stephanie Meyer, Giftedness and intelligence are innate. “Parents will describe their child from the beginning, the very first moments of life, as just being super alert,” she tells Away We Grow host Diane Mizota. “Parents will often come in describing their child as having an extraordinary memory advance mathematical ability, sense of humor–just extraordinary sense of humor in a two-year-old–advanced storytelling abilities. They will often describe their child as having advanced vocabulary skills and the ability to articulate their feelings and ideas in ways that seem far beyond their age-mates.”

Giftedness is assessed via an IQ test, the most common being the Wechsler system on intelligence tests. Children who score higher than 130 on the test are considered gifted. But in addition to pure numbers, parents need to look at a wide range of their child’s behaviors and development patterns. Says Meyer: “Kids who are highly gifted often are very, very curious. They may not be great sleepers early on. A lot of them were colicky to begin with. The whole idea of being an infant wasn’t a great fit.”

She adds that many kids who are highly intelligent also have sensory processing differences. “In order to take information in heightened, rapid, different ways, their sensory system is on high,” explains Meyer. “A lot of times you see highly gifted kids putting their hands over their ears or not really enjoying being in crowds.”

Gifted children may also have a higher activity level and difficulty getting along with kids their age. “These children often will connect more easily with older children, adults, the elderly, and then very young children,” she says “They’re a little more advanced and they’re a little more behind so they may lag behind a little in the social, emotional sphere and the self-care sphere um but then their vocabulary is beyond sometimes where their peers are and their interests can be different than their peers.” This inability to connect well with friends could signal other behavioral problems.

Meyer recommends that parents seek out professional consultation with experts so that mom and dad “are not the ones stuck with the guess work and so that they can just enjoy their child. Such a big part of what I hope comes out of this process is that the child is able to embrace all parts of him or herself and that parents are able to embrace all parts of their child.”