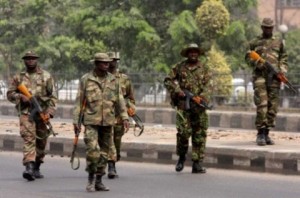 Even as blasts and gunfire rocked Gashua in Yobe State on Tuesday, members of the Joint Task Force (JTF) have reportedly killed four suspected Islamists in a shootout and arrested four others while raiding an alleged hideout, the military said.

According to army lieutenant, Lazarus Eli, “Our men raided the house identified as their hideout in Gashua this morning. We succeeded in killing four of the gunmen in a shootout and arrested four others.” However, he did not say if any of the JTF troops were killed or injured, but added that soldiers recovered ammunition and three AK-47 rifles, as well as phones and laptops.

The raid followed intelligence that suspected members of Islamist extremist group Boko Haram who allegedly carried out an attack on Sunday in the town of Fika were hiding in Gashua, he said. Both Gashua and Fika are in the northeastern state of Yobe.

Meanwhile, residents had earlier in the day reported hearing explosions and gunfire that lasted for about three hours and shook the town. Soldiers had also been patrolling the streets. On Sunday, gunmen armed with explosives attacked a police station, a primary school and two cellphone towers in Fika, setting them ablaze, the military and residents said.