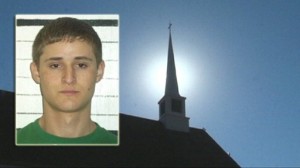 Anybody who knows Oklahoma District Court Judge Mike Normanprobably yawned at the news that he’d sentenced a teen offender to attend church as part of his probation arrangement, and that the judge’s pastor was in the courtroom at the time.

Not only had he handed down such a sentence before, but he’d required one man to bring the church program back with him when he reported to court.

“The Lord works in many ways,” Norman, 69, told ABC News today. “I’ve done a little bit of this kind of thing before, but never on such a serious charge.”

Norman sentenced Tyler Alred, 17, Tuesday after he pleaded guilty to first-degree manslaughter in August for killing friend and passenger John Luke Dum in a car crash.

Dum died on impact in December after Alred crashed his Chevrolet pickup truck, ejecting Dum. Alredwas 16 at the time of the crash and had been drinking prior to the deadly accident.

Oklahoma Highway Patrol  issued a Breathalyzer at the time, and although Alred was under the state’s legal alcohol limit, he had been drinking underage.

The judge could have sent Alred to jail but, instead, taking into account his clean criminal and school records, sentenced him to wear a drug and alcohol bracelet, participate in counseling groups and attend a church of his choosing – weekly. He must also graduate from high school.

He’d never passed down the church-attendance requirement for someone as young as Alred, said Norman, who has worked as a district Judge in Muskogee for 14 years.

“It’s not going to be automatic, I guarantee you,” Norman said of the church sentence on future manslaughter charges. “There are a lot of people who say I can’t do what I did. They’re telling me I can’t legally sentence someone to church.”

Alred’s lawyer is not among the critics. “I usually represent outlaws and criminals,” defense attorney Donn Baker told the Muskogee Phoenix”This is a kid that made a mistake. I think he’s worth saving.”

In the courtroom this week, an emotional scene between the victim’s family and Alred played out after statements from Dum’s mother, father and two sisters were read during the sentencing. Dum’s father and Alred stood up in court, turned toward each other and embraced one another.

“At that moment, it sure became a reality to me that I would sentence this boy to church” to help set him on the right path, Norman, a member of First Baptist Church in Muskogee, said. “There’s nothing I can do to make this up to the family.

“I told my preacher I thought I led more people to Jesus than he had but, then again, more of my people have amnesia. They soon forget once they get out of jail.”

After completing the rest of the requirements in his sentence, Alred will have the charge removed from his record.

“Only time will tell if we’ve saved Tyler Alred’s life,” the judge said.