In an arrogant display of power and reminiscent of the dark days of military dictatorship, the Commissioner of Police, Lagos state, Umar Manko, on Tuesday ordered a correspondent of The PUNCH newspapers, Kunle Falayi, out of the premises of the police command’s headquarters in Ikeja. 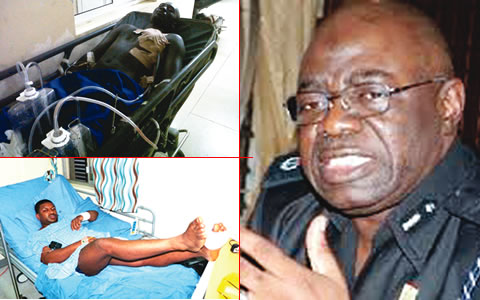 Manko who was visibly peeved at a story published on Tuesday titled, ‘Guard shot by policemen in critical condition’, saw it as an attack on the integrity of the police.

“So, you are the one who wrote this rubbish? Were you there when the policemen shot the security guard? You people like to write rubbish,” he thundered.

Not satisfied, the CP then asked his orderly to escort the journalist out, adding “make sure you follow him until he (Falayi) is out of this premises.”

The journalist was at the command headquarters to carry out his legitimate duty of reporting a press briefing to be addressed by Manko and the parade of some alleged criminals.

However, journalists from other media organisations were allowed to cover the event.

PUNCH Metro had on Monday and Tuesday reported that a banker, Femi Badejo, and a security guard, Joshua Musa, were shot by policemen who had responded to a distress call to foil a robbery at the victims’ home in Ikota, Lagos on Saturday.