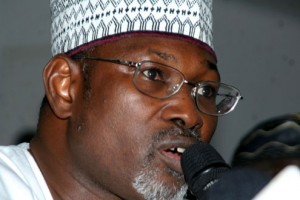 Shortly after the Chairman of the Independent National Electoral Commission (INEC), Prof. Attahiru Jega, alleged that some political parties have set aside funds to bribe the commission, the Peoples Democratic Party (PDP), on Tuesday challenged the INEC boss to name such parties.

Of course, all the parties have been distancing themselves from such acts. The ANPP said it had no capacity to offer bribes to INEC and security agents, claiming that the PDP must be the bribe giver because “it (bribery) is clearly the practice act of the PDP.” The LP on its own part said it was too small to bribe INEC and also pointed out that Jega must be referring to “the big political parties.”

Jega, at the opening of a two-day roundtable conference with the theme, “Party Politics in Nigeria and Lobbying, the Lobbyist and the Legislature,” on Monday, in Abuja, had said that political parties in the country budgeted money with which to bribe security agents and officials of the electoral body during elections.

Meanwhile, in what can be described as a bold move, the PDP has challenged the INEC boss to mention the names of parties involved in such activities. Speaking with journalists in Abuja, the National Publicity Secretary of the PDP, Chief Olisa Metuh said, “We heard what the INEC chairman said that some political parties attempted to bribe INEC officials to help rig or influence elections, but our response to it is that the INEC chairman should be honourable enough to mention the names of the political parties involved… Under the circumstances of transparent and fair elections, INEC officials can no longer rig or influence elections as shown from the result of governorship elections that were held in Edo and Ondo states… We are therefore urging the commission to mention the names of political parties that offered bribes to it to enable the PDP reclaim the two states.”