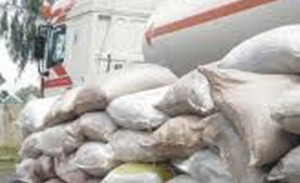 Barely less than a week after a truck, fully loaded with Indian hemp, was seized in Zamfara State on its way from Ondo, the Ondo State Command of National Drug Law Enforcement Agency (NDLEA) has displayed over 8 tons of substances suspected to be Indian hemp seized from traffickers from two different spots in a thick forest near Ipele, a town in Owo Local Government Area of the State.

The State Commander of NDLEA, Mr Walter Nicholas, while explaining the two scenarios to Newsmen and displaying the seizures at the premises of the Command’s headquarters in Akure, said his officers got informed through intelligence gathering and decided to investigate it.

According to him, in the first seizure, about 300 bags, weighing about 3 tons in sack bags were loaded in the truck with plate number: LAGOS XP 622 KTU with granite packed on them to conceal them. He disclosed that two suspects have been arrested in connection with the crime and further investigation was in progress.

Also, in the second seizure in another location in the forest, over five tons, also loaded in sack bags were discovered inside a hut. The NDLEA Boss vowed that the command will push the drug offenders in the state to the wall until they all abandon the illegal trade.