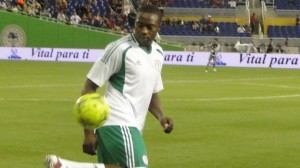 Newcastle United striker Shola Ameobi has expressed his delight over an opportunity to finally play for the Super Eagles of Nigeria in a international friendly in which they beat Venezuela in Florida on Wednesday.

The former England Under-21 star was handed a second-half debut by coach Stephen Keshi in the 3-1 victory and, despite only playing for half-an-hour, the striker was pleased to have made the step up to international football. According to him, “It’s my first game, I just feel honoured to play international football,” he told BBC Sport.

The striker has been praised by fans and officials after helping set-up the third goal and the 31-year-old insists he has nothing but respect for his team-mates: “This game will prepare us for what to expect at the Nations Cup… We played good and made life hard for them,” he said.

On his contribution to the victory, and the quality of the opposition, Ameobi said, “It was nothing personal, we fought hard and gave our everything… They had great support here but we took the game to them. The lads were superb and I’m delighted to have contributed to a good win,” he said, praising the opposition as a quality side too.