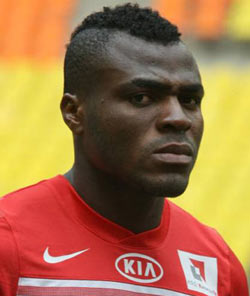 Nigerian international and Spartak Moscow player, Emmanuel Emenike, may be spending three years in jail after Turkish prosecutors on Tuesday called for a three-year prison term for him following his implication in a widespread match-fixing scandal.

The lawyers in Istanbul accused Emenike, who currently plays for Spartak Moscow in the Russian Premier League, of faking an injury to avoid playing for his former club Karabukspor against Fenerbahce in May 2011, the Anatolie news agency reported.

The footballer’s agent had beforehand been approached by Fenerbahce officials to arrange the player’s “injury” for the match, they claimed. The 25-year-old attacker’s case has been tried separately from a larger trial that has rocked Turkish football and which ended in July seeing the president of Fenerbahce, Aziz Yildirim, sentenced to six years and three months in prison.

A total of 93 people were tried and a number were found guilty of having fixed matches in the Turkish first and second divisions in the 2010-11 season, as well as for malpractice. Emenike joined Fenerbahce in 2011 but did not make a first team appearance for the club before he was transferred to Spartak.