Nigerian Teenager Gets New Limbs For Free After Attack 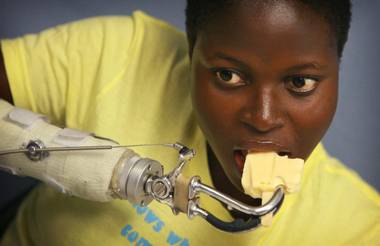 Ruth Folake Idowu, 19, of Nigeria, eats a popsicle in the waiting room of Johnson’s Orthopedic in Riverside where she was being fitted for a new prosthetic arm on Thursday. Idowu lost both arms two years ago to a knife-wielding madman in a restaurant in her native country.

After a madman hacked off both her hands two years ago, 17-year-old Ruth Idowu prayed to Jesus for new ones.

The faith of the shy Nigerian teenager and the kindness of strangers – who are now dear friends — have prevailed. Today, the people at Johnson’s Orthopedic Appliances in Riverside are making Ruth two new appendages free of charge to restore the limbs and the independence she’d so brutally lost in her native country.

The journey was set in motion by Ruth’s sponsors and hosts, Tunde and Titi Akinremi – a married couple with residences in both Colton and Nigeria. Tunde, 57, a paraplegic, founded a support group decades ago in their African homeland for the disabled. Learning about Ruth’s plight, he quickly notified friends he knew through a special-needs family camp in Southern California who had connections to Johnson’s Orthopedic.

The camp had inspired Tunde to launch a similar one in Nigeria in 1995. Called Tunde And Friends Foundation, the organization is funded by donations to provide health-care screening and equipment such as canes and wheelchairs. With airfare and other expenses paid through this nonprofit, Ruth Idowu and a friend from her hometown are staying on six-month visas with the Akinremis at their Colton home.

Since October, Mike Openshaw, 35, the head prosthetist at the clinic, located at 7254 Magnolia Avenue, has been fitting Ruth with temporary mechanical limbs, readying her for the finished products in a couple of weeks.

“She’s doing wonderfully, better than I expected,” he said. “When she came she said, ‘Get my hands back’.”

Idowu had never heard of or seen artificial limbs. Openshaw explained that he could only make her arms functional again, not restore her hands.

As she awaited a recent appointment, Idowu, now 19, licked mango ice cream on a stick clasped between the aluminum pincers attached to a plastic device on her right arm. “I can eat,” she marveled with a big grin, relishing a simple pleasure long denied her. She talked about learning to drive, using a computer and studying accounting when she returns home early next year.

“She loves to boil water in our kitchen,” Titi Akinremi, 58, said with a laugh. “She used to do a lot of cooking in her parents’ restaurant.”

Titi’s husband Tunde, a math teacher in Pomona, said that Ruth picked up the phone when he called her from work. Her occupational therapist, Cathy Armitage, who is volunteering her services, rewarded Idowu’s progress with a battery-operated toothbrush. When asked what tasks had become impossible, she replied in halting English: “Everything.”

Ruth Idowu’s life changed forever on Oct. 2, 2010, transforming her from a carefree high school graduate to a helpless amputee. She was clearing tables in the tiny café her parentsown in Oja Odan, a city of 7,000 in Southwest Nigeria. A drug-crazed man with a knife burst in and began slashing at Ruth from behind. When she raised both hands to protect her neck, the attacker chopped off her right hand at the wrist and severed her left arm at the elbow.

Jungle justice ensued, said Tunde Akinremi, interpreting for Ruth. A gang of young men chased the assailant, doused him with petrol, set him afire and watched him burn to death.

But there was no justice for the maimed Ruth, who spent eight months recovering in a Nigerian hospital. “There are limitations to health care in Nigeria,” said Titi Akinremi, a pathologist. “She couldn’t get this,” she said, gesturing as Openshaw fitted Ruth with left arm prosthesis.

“At best she would get a wooden stump,” her husband Tunde Akinremi said. “She would be dependent all her life. There would be no opportunities for that girl.”

He met Ruth for the first time last year. She and her pastor traveled three hours to Abeokuta, the Akinremis’ hometown, to plead for help from the Tunde And Friends Foundation. One of its biggest supporters is Center Point Church in Colton where the Akinremis worship.

Tunde Akinremi immediately accepted the challenge. It would take more than a year to network with his American friends and unscramble the red tape to bring Ruth to Riverside.

For the past 30 years, he’s been in a wheelchair since a car accident in Nigeria, the impetus for his involvement with special-needs people. In 1998, he became close friends with Robyn Souder, whom he met at a retreat for families of disabled loved ones in Agoura Hills. For 26 years, orthotists at Johnson Orthopedic Appliances have been making braces for her son, Joshua, who has cerebral palsy. Clinic owner Bill Kearney agreed to treat Ruth for free.

Souder, 53, persuaded retired rehabilitation specialist Armitage to come on board. “At first Ruth was extremely shy,” Armitage said. The breakthrough came when she showed Ruth a video of an amputee like herself with two artificial arms: Ruth understood.

“She’s full of joy,” Armitage said. “She will be totally independent.”

Souder, who’s thrown dinners and parties for Ruth and her friend Dorcas in her Lake Mathews home, describes their spontaneous eruptions of singing and dancing.

Every Tuesday and Thursday the Akinremis bring the women to the clinic. Prosthetist Openshaw recently fitted Ruth with her temporary left arm, demonstrating its seven positions, operated through rubber bands and bicycle cables. The customized finished products for both arms will be made of laminated, flesh-toned carbon fiber, each weighing less than 2 pounds and lasting two to three years.

To find out more about Tunde And Friends Foundation (TAFF), visit www.tundeandfriends.org

A British pensioner who has been blown away by love is planning to wed her 35-year-old Egyptian toy boy despite the age difference between...
Read more
- Advertisement -