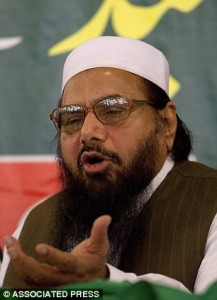 Hafiz Saeed, a terrorist leader with a $10million bounty on his head by the US, has offered aid to Americans hit by Superstorm Sandy. Hafiz Saeed said his organization Jamaat-ud-Dawa was prepared to send volunteers, medicine and food to those on the East Coast who were struggling to cope in the aftermath of Monday night’s ferocious storm.

In a written statement on Tuesday, Saeed said that it is a religious duty under Islam to help Americans affected by the storm, even if the U.S. has put a bounty on his head.

However, following the militant’s offer, the U.S. Embassy in Islamabad posted on their Twitter feed: “We respect the Islamic tradition of help to the needy, we can’t take Hafiz Saeed’s offer seriously… Saaed is wanted for suspected involvement in the Mumbai attacks, which killed 166. JuD is a UN&US-designated terrorist org.”

Earlier this year the U.S. offered $10million for information leading to the terrorist’s arrest or conviction. He is in the top five most wanted on the U.S. terror list. He had initially been advised to go underground by associates following the U.S. bounty but later decided against it and maintains a high public profile. He founded Lashkar-e-Taiba, a militant group blamed for the Mumbai attacks in 2008 where more than 160 people were killed. Jamaat-ud-Dawa is believed to be a front for Lashkar-e-Taiba, which was banned by the Pakistani government.