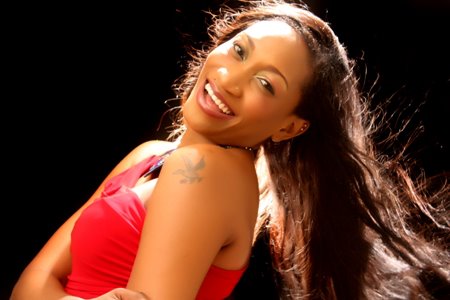 When success stories are written in the annals of Nollywood, Oge Okoye’s name cannot be overlooked.

Gorgeous and gifted, Okoye, who hugged the lime light in 2001 with the movies, “Caesar to Caesar” and “Spanner”, not only conquered Nollywood, she captivated and wowed her fans with blistering and daring acting, so much that her memory continues to linger in the minds of movie buffs.

Today, after two kids, the star of numerous blockbusters remains evergreen. She is not only relevant in the industry after about 11 years, but has also broadened her horizon to become multifaceted and a sought-after diva.

In this encounter, the soft spoken entertainer went gaga and revealed her other side when Entertainment Express asked an innocent question about her sexual appetite.

“What kind of question are you asking me?…How I make love…that is my personal life and I think personal things should remain personal,” she fumes.

Okoye who was recently honoured with a Doctorate degree by Wisconsin International University, USA, further bared her mind on other germane issues and sketched a broad outline of her real self. We present the riveting interview, raw and uncut.

So when and how did you meet your husband?

It was really not love at first sight, I personally don’t believe in love at first sight. I believe in working it out, knowing ourselves, to see if we are compatible, so that is what exactly happened between me and my husband. We were friends at first and it was going on like that till we got married in 2005.

How does he feel about the romantic scenes you play in movies?

He has never complained. I really don’t know if he feels bad, but I know that being a human being like I am, he might be feeling bad inside but he is not showing it. He encourages me a lot; he is always there for me. Besides, he doesn’t watch my movies.

At a point your marriage was widely reported to have hit the rocks; surprisingly, you didn’t come out to clear the rumour, what actually happened then?

I don’t have business responding to such falsehoods. I don’t know the people peddling such rumours and I have no business with it.

So are you saying the marriage is still intact?

What do you mean? Is like you have another mission! Why won’t my marriage be intact? Please nothing has happened to my marriage. I really don’t know why people would be interested in breaking our marriages; nothing like that exists. It amazes me the way people go about talking about a marriage break up that does not exist. I’m happily married and I don’t want to discuss my personal life.

Since he is not living with you here in Nigeria, how do you cope with the numerous male admires?

Of course everybody knows that I’m married; I wonder what anybody would still want from me.

So how do you relieve when you have feelings?

What kind of feelings are you talking about?

Sexual feelings, to be specific

One should have expected that you attend an event with your husband whenever he is in Nigeria so as to clear the numerous rumours of broken marriage trailing your person, why don’t you usually do that?

I don’t think that is necessary.

So where is that lucky man from?

He is from Imo State and I am from Nnewi, in Anambra State.

What is one good thing that marriage has done to you?

I think it has made me more mature.

Your last born is about two years, how soon are we going to be celebrating the arrival of the third one?

I believe God’s time is the best.

But would there be anyone by this time next year?

Actually, we are not ready for any other one now. We are taking a little break from child bearing.

After two kids, you still look youthful and sexy; what is the secret behind this?

Really! Maybe because I’m slim naturally. Apart from that, I exercise a lot. I do all kinds of exercises from cycling to normal stretching. I think that is what has been helping me to stay in shape.

How far can you go to interpret a role, especially the ones involving nudity?

I do everything within my capacity to ensure that I perfectly interpret my roles. But one thing I cannot do is to go stark naked. But I could do other sensual roles but for nudity, I wouldn’t. Our society abhors it.

What about such things as smoking, as some of your colleagues do?

Why should I smoke? Has anybody told you that I smoke? I don’t have to do that, I don’t do it and I don’t think I will ever indulge in that if that is what you are asking.

But some of your colleagues do; do you see anything wrong with it?

I think that is their personal business. I don’t have anything to say about that. I don’t interfere in someone else’s private life, as much as I don’t want anybody to interfere in mine.

Most of your colleagues are said to be into lesbianism, how have you been coping with their amoral advances?

Generally, what is your view about the act?

You and I know it’s wrong; I don’t think it’s something anybody should be practicing.

If given the opportunity to erase anything in your past, what would you’ve erased?

I think the only the thing I would’ve loved to erase is the death of my father. It was such a bad experience that haunted me for years.
He was such a lovely father anybody would pray to have. It’s been long, so I’ve tried to put it behind me.

What kind of man epitomizes your ideal man?

My ideal man should be hard working, must look good, and at same time have the fear of God

Are those things what attracted you to your husband?

Since your marriage is still intact, what effort did you put in to sustain it till date?

It’s all about loving someone unconditionally, trusting the person and at the same time being tolerant. These are the ingredients of a lasting relationship, and I think they are part of what has sustained mine as well.

Are these ingredients lacking in the failed marriages recorded by your colleagues?

Unlike your colleagues, you got married back in 2004; were you under pressure to marry since you are the only child of your parents?

It wasn’t because of that. I fell in love with a man and we ended up getting married. Nobody ever pressurized me into marriage

How did you go about settling your rifts with your friends, Ini Edo and Chioma Toplis?

Who told you there was any rift? As far as I’m concerned I don’t have any rift with anybody.

Does that mean you’ve settled with them?

I don’t know what you are talking about, and please I don’t have an answer to that question.

If you had known all that you know today, what did you do in the past that you would you’ve done differently now?

I don’t really know what I would have done differently; I think I did everything I’ve done based on the prevailing circumstances. I don’t regret anything I did in the past. I know I must have made some mistakes, but I try not to remember them because I have already forged ahead. Whatever mistake I made in the past has been confined to history, I’m now looking ahead to what the future has got to offer.

What were these mistakes?

There you go again. I think that is my personal life, which I would want to remain personal.

Share with us what life has taught you over the years?

Frankly speaking, life has taught me to be independent, to never give up no matter what I’m facing, to always believe in myself, to work hard and always remain focused. I’ve come to understand that everybody can be a better person, and everything anybody needs to succeed in life is in that person.

Most producers are currently lamenting on the evil effect of piracy; does the menace affect what you are currently paid for jobs?

It hasn’t. I feel that whatever I’m getting is what I’m supposed to get. But the menace is a very big challenge to the industry; you find out that before one’s film is released someone somewhere would have already released a pirated copy, it’s painful. I believe there will be a change if the government finally puts an end to it; it’s something that must be collectively fought against.