The Lagos State chapter of the Peoples Democratic Party has urged the governor of the state, Babatunde Fashola, to stop the clampdown on commercial motorcyclists, known as Okada. 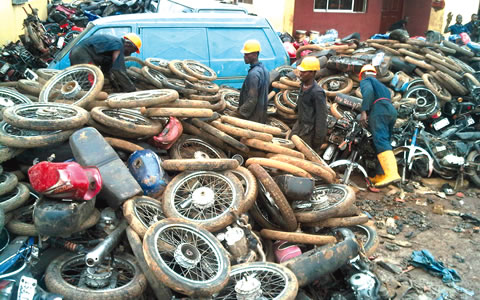 The Publicity Secretary of the party in Lagos, Mr. Taofeek Gani, said it was a mark of good leadership to reverse policies that adversely affected the lives of the people, just like President Goodluck Jonathan did with the removal of fuel subsidy and the proposed introduction of N5000 bill.

Gani accused the Action Congress of Nigeria-led administration of passing the traffic law to open up more avenues for the generation of revenue for the party to the detriment of Lagos residents:

“Seeing the level of hardship the restriction Okada has caused, I think the reaction of a sensitive government would be to reverse the decision. Fashola should learn from Jonathan. When Jonathan saw the level of protest against the introduction of the N5000 note, he stopped it. He also reversed the total removal of petroleum subsidy in January because of the effect it would have on people. That is how leaders who are interested in the welfare of people act.

“In spite of the fact that internally generated revenue in Lagos has risen to N48bn per month, they are still looking for unjust ways to make money. They insisted that firms such as courier companies should purchase motorcycles from government agents before being permitted to run on the roads.”

According to Gani, the traffic law is also meant to frustrate commercial bus drivers, who the new law stipulates must wear uniforms and badges that are to be purchased from the state government.

He said, “ACN wants to push out all these people earning a living by transporting people and then handing over transportation in Lagos to their cronies. They have driven Lagos from capitalism into imperialism.

“ACN is now showing what it is made of. Before the election in 2011, they gave helmets and vests to the okada riders. The okada riders were behind Fashola everywhere he went to campaign, then they were not armed robbers and they were not causing accidents. Weeks after he got the second term, he started chasing them everywhere. The same thing they did with the Lekki toll gates. They did not collect any toll until after the election.”

However, the state government had insisted on the ban, claiming that no fewer than 619 people were either killed or seriously injured in commercial motorcycle accidents across the state in the last two years.

While quoting from the record of the Lagos State Traffic Management Authority, the Special Adviser to Governor on Media, Mr. Hakeem Bello, in a statement said out of the number, 107 people died while 512 sustained serious injuries.

Similarly, the state Commissioner of Police, Mr. Umaru Manko, recently said 98 per cent of robbery incidents in the state were allegedly committed by okada riders.

He said, “They wait for people at the bank and other strategic places to rob them. I think the government of Lagos State is lenient with them. If I were to make law for okada riders, I will recommend that it should be banned completely.”