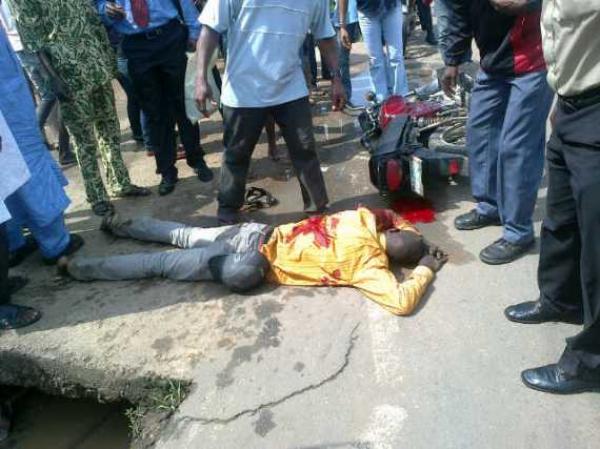 The okada rider, whose identity is still unknown, was said to have been shot at 10.52 am on the chest by men of the Ilupeju Police Station who immediately fled from the scene after the act.

He was rushed to Teju Hospital adjacent the scene of the incident by passers-by but reportedly died before he could be treated.

According to eye-witnesses, the okada rider was chased to the spot by the policemen in an attempt to arrest him, but when they could not, one of the policemen shot him and they immediately sped off.

Another eyewitness identified as Semiu, told newsmen that the officers were part of the Lagos state Task Force headed by Bayo Suleiman.

According to him, the victim, who is a member of the Oodua People’s Congress (OPC), was first stopped by policemen at the Cappa junction in the area and he evaded them only to be shot by them.

“When they realised what they had done to him, they ran back to their vehicle and drove away, leaving the guy bleeding profusely,” the source said.

The situation resulted in serious tension in the area as youths in the area took to the street saying they would attack government properties including vehicles of the Bus Rapid Transit (BRT) scheme plying the area.

The incident is coming barely 24 hours after the state House of Assembly condemned the overzealousness of some police officers in the implementation of the law.

They had called on the state Commissioner of Police, Umaru Manko, to stop his men from messing up the law and exposing the state government to ridicule by their actions.

They also called on the police authorities to investigate all inhuman actions meted out to residents of the state by the police. [PM]