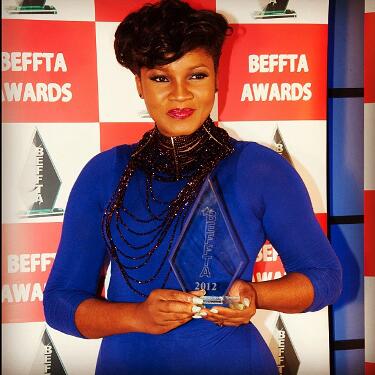 Speaking to the press in London, the star expressed her gratitude for being honoured with such a high profile award.

Omotola Jalade-Ekeinde has become the first movie star to be awarded with the special BEFFTA honorary award in the film category, other high profile personalities who received BEFFTA special award this year include Sir Trevor McDonald OBE recipient of BEFFTA LIFETIME ACHIEVEMENT award.

The humanitarian and Amnesty international activist said, “this is the best award I have received on a global level, it is such an honour and I’m truly humbled that 16 years of my work in the film industry has been rewarded in a special way internationally. There are so many people to thank for bringing me to this level, special thanks goes to my husband for always being there, everyone that I have worked with but most importantly my fans. I love my fans so much, they are very supportive”.

BEFFTA founder Pauline Long commended Omotola for her contribution to the film industry but also for her great charitable work.

The BEFFTA FILM ICON award was presented to Omotola by PR guru Theodora Ibekwe in the presence of London press and invited guests.