Home Lifestyle Oritsejafor Speaks On Private Jet Ownership, What He Does For The Society
Facebook
Twitter
WhatsApp 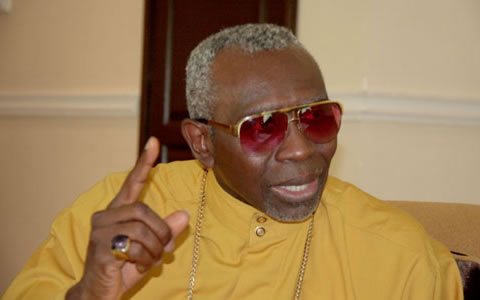 Since November 10 when a private jet was presented to Pastor Ayodele Joseph Oritsejafor, the national president of Christian Association of Nigeria by his church, Word of Life Bible Church, Warri, a lot of controversies have trailed the birthday gift of an airplane with many of the opinion that men of God are not doing well enough as they live in affluence and luxury while their congregation remain poor.

Message of salvation has been left in the backburner by some pastors while all they preach is prosperity. Yes, they prosper, but same cannot be said of their members. A lot of Nigerians even asked questions on why the church shouldn’t start paying taxes since it had become an avenue of enriching some pockets. No one can crucify the other for their opinion on this subject as most people have salient points to back their claims and belief.

In an interview with Vanguard news, Pastor Ayo Oritsejafor spoke to douse the doubts of those who still think he bought the airplane with his money. Oritsejafor said he doesn’t have the kind of money to buy airplanes, but pointed out that it was a necessity for his ministry and not a luxury as most people think.

“Coming to the issue of jet, I had no single idea of how it came about. It is true that people like us have gotten to a point where we need to have means of movement that will help us. You may have heard me speak about my trip to Indonesia, to Jakarta.

“In fact, it wasn’t even Jakarta I was going to, but I had to stay inside an airport in Jakarta for five hours to wait for my flight, to get to the very city I was going. I was only going to preach for two hours there. I flew from Lagos to Dubai and I spent over three hours, changed flight to fly to Jakarta and then stayed five hours at the airport just to catch a flight to where I was going to, where I was to preach for just two hours.

“And after everything, I got a flight from that place again to Jakarta, stayed at the airport again for another five hours, then flew into Dubai, stayed again at the airport for another three hours before I flew into Lagos. It took me four days to make a journey to preach for two hours. I’m a human being and I am not getting younger every day.

“And locally, it is worse, for instance, the acting General Secretary of CAN lost his father in a place outside Uyo, Akwa Ibom State and I had to be there. I preached in a place in Lagos on a Friday and needed to be back to Warri on a Saturday, but at the end of the day, the plane that would have taken me was nowhere.

“I had to charter a plane for N3.5 million to take me to Uyo, waited for me to finish and then take me back to Warri. Two weeks ago, a young pastor in Port Harcourt built a new church and had been on me all this while to come and dedicate the church and suddenly from no where, there was this flood that cut off the road to Port Harcourt.

“I had to get to Warri that Saturday so as to be able to preach the next day, Sunday. Do you know what I had to finally do? I chartered a helicopter that cost me N2 million to drop me in Warri. When they dropped me here, ah, I can’t tell you how I felt that I had to part with that sum. But I had promised the young man and the church and if I had said no, will it be right? I can go on and on and on.

“So, sometimes, my schedule is so complicated. Now, with this plane, it changes everything about my movements. Now, I can move, I can even go and come back home. It is a bit more convenient for me and I suspect that this is one of the reasons a lot of these other preachers have planes,” Oritsejafor explains.

Pastor Ayo Oritsejafor also gave account of some of the things he had donated to charity as he pointed out a lot people questioned him on what he has done for the society.

“If you watched me today, I was talking about a young man who has been trying to go to a university for three years now. I didn’t know him from Adam. One day, after a service here, one of my pastors brought him to me. As soon as he saw me, he held my legs and began to cry! He showed me all the papers, pleading that he had tried to gain admission to any university here, it never worked.

“So he finally got admission to study in Cyprus. I paid his school fees, helped him with ticket and everything he needed, he’s gone. He has since resumed school and is there in Cyprus now. How many people will know that? In the last seven to eight years now, I have paid school fees of over 100 people in different universities, polytechnics and colleges of education.

“Some of them have graduated and have come here to share their testimonies, excitements and even their parents have come here to thank us. I don’t know them from anywhere. Every December 26, I do a very big thing here. We call it poverty alleviation.

“Some of these people come here to give testimonies; some are now married and have children. There was this young boy, a Moslem from Auchi. This young man, nothing good was coming out of his life, he was rejected, nobody wanted him and one of our pastors took him into a teaching centre and he was sleeping in the teaching centre. They were helping him. This boy had driver’s license, I don’t know how he got it. He had no job and couldn’t do anything.

“Last two years, when we were doing the poverty alleviation, he applied. And they brought out a name which happened to be this boy’s and he won a brand new car. Today, that boy has rented his own house; in fact, his parents who are Muslims came to church on a Sunday and worshipped with me and danced all over the place and, after the service, they came to me and thanked me, saying ‘oh, this boy that you don’t even know from anywhere, you dashed him a car.’

“They were very happy. Besides that, many lives have been transformed here. We have changed many lives. We have an orphanage here. As we are talking, an American couple has gotten in touch with me. They want to adopt a child from our orphanage. We have a clinic here that hopefully will develop into a full blown hospital. People go there and pay little something for treatment, but generally on Sundays people are treated free.

“These are some of the things we do. Most people don’t know this and I don’t think I am the only pastor doing this. So a lot of people who are saying this against pastors are just being mischievous. They may have their reasons, some of them are bitter about something and they are not telling the full story about what is making them bitter.

“We have buses that we use in carrying people. If I tell you some of the things that we used to do, it will shock you. There is a woman in my church, when she came to this church, she had probably two blouses and a wrapper, no slippers, not even bathroom slippers.

“She had never entered a classroom before. I didn’t even know her. She is from one of these oil bearing communities. There was a time an oil company in their community wanted to do business with them and she was interested but had no money. She came to us for assistance. I don’t think, at that time, she had ever seen N10,000 in her life.

“So she went to our micro-finance bank, Mama (my wife) runs it without salary, she and all our directors don’t earn one naira. She went to the bank and said she wanted to borrow money. My wife asked her; `how much do you have in your account’, and she said, I don’t even have an account’.

“My wife looked at her, and she called me about it and I said, `look, leave me out of it’. We didn’t even have that kind of money at that time. She asked the woman again, `how much do you have now and the woman said N2,000′. She now advised her to use that money to open an account and she did. Mama now went round to source for the amount.

“The short story here is that she got the money, did her business and in less than six months, she paid back the money she collected. As we speak now, she is one of the richest women in Warri. She bought me an incredible car that cost millions of naira some years ago,” Oritsejafor said.

Pastor Oritsejafor said he is not ashamed to own a plane, and thinks it is “a necessity and not a luxury for some of us deeply involved in the work of God to own planes.”