All Vhuhwavho Ravhuhali wants is to lead a normal life, with a normal right arm, not one that keeps growing, and growing . . . and growing! 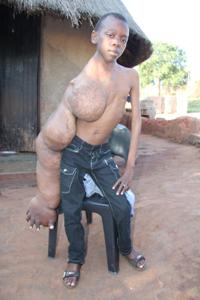 For 10 years poor Vhu, aged 13, has watched his arm become more and more swollen and elongated until today it hangs painfully by his side. He dreams of becoming a doctor.

But he doesn’t go to school. Nor does he go out of the yard of his home in Tshivulani Village, near Thohoyandou, Limpopo. He’s afraid the other boys will touch his arm and give him more pain.

His mother Betty is desperate to cure her son. But hospitals, doctors, spiritual healers, pastors, prophets and sangomas have not been able to help. Now there is hope in the form of Limpopo’s MEC for Health, Norman Mabasa a doctor himself. Mabasa has promised to meet Vhuhwavho and his mum personally.

“I’ll make sure Vhu gets the help he needs and a proper diagnosis at a hospital,” he promised Daily Sun.

Said Betty: “It’s hard for a mother to see her son, who is a sweet, bright child, suffering like this for so many years, sitting at home, crying with the pain. I don’t know what to do any more.”

Vhu’s condition began when he was three and he fell down, said Betty.She took him to the Tshilidzini Hospital where doctors didn’t see anything wrong. But when this arm started growing he was referred to the Polokwane Provincial Hospital and then transferred to Dr George Mukhari Hospital in Pretoria.

Doctors there recommended amputation as the only solution which shocked Betty.

“I refused to have his arm cut off, because they didn’t even tell me the cause or the illness he was suffering from,” she said.

She turned to sangomas for an explanation of Vhu’s swollen arm.

“When I came back home, I consulted sangomas, spiritual healers, pastors and prophets but they didn’t change anything. We are a poor family and can’t afford specialists. I just believed that I might find someone who would help my boy,” she added.

Vhu himself talked to Daily Sun about his condition. He told us his hand is painful if pressed.

“I just panic and become scared when I see other kids my age. I’m afraid they they will want to touch it out of curiosity and hurt me in the process. I feel sad because every morning I see boys my age going to school past my house and I wish I could join them, but I can’t. My dream of becoming a doctor is shattered. If God saves me, I can go to school with others, and contribute towards my country,” said poor Vhu.

He’s looking forward to the MEC’s visit in the hope that something will be done at last. Kids at Tshivhulani Village said they know Vhu and they feel sorry for him. But they said they don’t want to play with him.

Pastor Ester Rambani of the Arise and Shine International Ministry based at Sibasa told Daily Sun she was deeply touched to see the young boy in his condition and prayed for him.