Osaze Peter Odemwingie who last played for Nigeria in a 2013 Africa Cup of Nations qualifier against Rwanda on February 29 in Kigali, has declared he doesn’t want to play for Nigeria anymore. This shocking admission was sensationally revealed by team coach, Stephen Keshi, to supersport.com 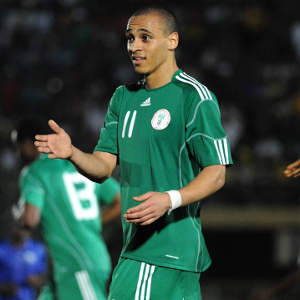 Keshi revealed that he spoke to the WBA forward a week before Nigeria’s second leg final round 2013 Afcon qualifying game against Liberia on October 13 and that Odemwingie told him that he had decided not to play for Nigeria again.

“I spoke to Osaze before the Liberia game and he told me that he had decided not to play for Nigeria anymore,” Keshi told supersport.com.

Odemwingie though had his reasons for wanting out of the Eagles.

Hear Keshi: “Osaze told me that he has no problems with me as a person and that he took his decision even before I assumed position as national team coach.

“He said he was unhappy at how he was treated in the past in the national team. He explained that prior to Nigeria’s participation at the 2010 Fifa World Cup, he played in all the qualifying games but was dropped at the finals.

“He said he was angry at the treatment meted out to him but did not discuss it with anyone. I told him that was not the best way to handle issues and that if he had already decided not to play for the national team, he should have opened up to me when I invited him to play,” Keshi said.

‘The Big Boss’ went on to reveal that he had an extensive discussion with the striker and tried to explain why things may have gone awry for him at the 2010 mundial.

“I told him that if the (Nigeria) coach (at the 2010 World Cup) benched him, he must have a reason for doing so and that things should have been handled differently.

“I told him that he should have spoken up and let me know. The coach has a reason and you can’t play in every game,” he said.

“I understand his feelings. I think he might change his mind but I really don’t know. The ball is in his court,” Keshi concluded.