The Williams sisters, Venus and Serena Wednesday put paid to insinuations that they were from Nigeria, when they said that they were proud to be American citizens.

Speaking at the Federal Palace Hotel, Venus, in a response to a question on their true origin, said that while they love Nigeria, the fact was that they were from the United States of America. 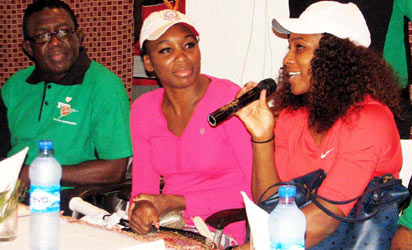 “This is another country that we would love to come from but we are from the United States and are proud to be from there as well”, said Venus

On their mother’s decision to name their late sister, Yetunde, after a Nigerian, Venus said that it was because of the mum’s love for Africa.

“My mum named my late sister after an Africa name because she loves Africa and that is all to it”, she said.