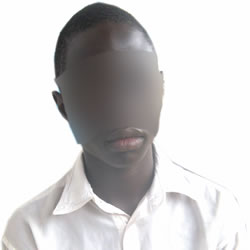 The incident was reported to have occurred on Sunday, November 11 at Ile Mesiah, Modina area of Saki, when the little girl’s mother, Mrs Sherifat Ahmed, sent her on an errand to go and buy a razor from a neighbour’s shop within the compound they reside in.

The woman, in her report at Saki police station, claimed that after about 30 minutes, she stepped out of her room to check on her daughter but saw her coming out of the shop, which door was closed in contrast to how it was usually left open.

Mrs Ahmed told the police that she also noticed that the girl’s skirt had been removed while her pants were torn. This, she added, prompted her to check her daughter’s private, and to her bewilderment, she noticed a deposit of slimy substance like semen.

Based on the report, the Divisional Police Officer, Mr Mohammed Suleiman Baba, a Superintendent of Police, sent some detectives to the scene and the suspect was promptly arrested. After initial investigation, the case was transferred to the State Criminal Investigation Department (SCID), Iyaganku, Ibadan, for further investigations.

However, during an interview with Crime Reports, the suspect denied having carnal knowledge of the little girl, saying that the woman lied against him because of the problem he had with her which made them not to be on speaking terms.

Sobbing as he was narrating how the incident happened, the teenager said: “The girl came to buy blade from my stepmother’s shop. She asked me to help her attend to the girl and I did, after which I went back upstairs where we live. About five minutes after, the girl’s mother came and wanted to break my head with a stick but I stopped her with my hand.

“My stepmum came out and appealed to her but she was shouting that I defiled her daughter. My stepmother begged her again and told her to await my father’s arrival. When my father returned to the house, he was angry with the woman’s report, saying that he had warned us not to mingle with small kids in our compound again.

“He took a cane and beat me, after which I went to wash my clothes. It was while I was doing this that police came to arrest me. I had a quarrel with the woman and I stopped greeting her. Maybe that was why she told a lie against me.”

Confirming the story during a press briefing recently, the Deputy Commissioner of Police in Oyo State, Mr Clement Adoda, said the boy would soon be charged to court. Crime Reports gathered that the case was eventually charged to court on Friday, November 16. The magistrate adjourned the case to November 29 while she ordered that the suspect be kept in police custody till the date of adjournment.