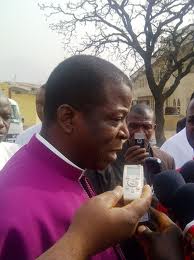 A Christian cleric, the Primate, Church of Nigeria (Anglican Communion), the Most Rev. Nicholas Okoh has cautioned African nations, saying that with the level of insecurity, poverty, doctrine of prosperity among other factors, it is obvious that the Christian faith is seriously under threat in the continent.

Okoh was speaking at the 2012 Divine Common Wealth Conference (DIVCCON) with the theme: ‘Contending for the Faith’ in Abuja. He said there is need by all Christians to imbibe common Christian faith in line with the Bible.

The cleric also pointed out that there is also threat which comes from within the Christian fold. In his words: “The main threat from within is, disunity among Christians which exposes the Church to so many disadvantages. There is scarcely a common understanding of how to approach the advance of violent Islam – some canvass fire-for-fire approach; others believe that Christians must continue praying and even try to preach to the Muslims with a view to converting them. Meanwhile, the killing and Muslim advance continue unchecked.”