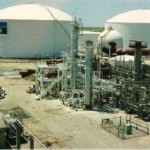 For those who eat Indomie a lot, in case you find the product scarce any time from now, do not be surprised. Information filtering in has revealed that youths from five communities in Chikun local government areas have shutdown and sealed off Africa’s largest indomie factory located in Kaduna South. The factory was sealed today at 6am.

According to the information, coming in from security sources in Kaduna, the youths are reported to be demanding for the industry to extend employment opportunities to the members of the host communities – as previously agreed. The youth protesters arrived at the factory facility at 6am with placards to seal off the facility. The youths comprised of a mix of Christains and Muslims from the five host communities.