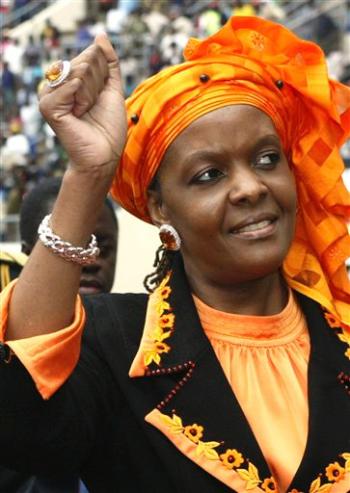 Mrs Mugabe said Zimbabweans should not waste their money visiting foreign prophets but should instead seek salvation cheaper locally.

Addressing thousands of Christians of the Zimbabwe Assemblies of God Africa, ZAOGA, at the Today’s Women Conference at Glamis Stadium in Harare yesterday, Grace referred to Christians who visit what she termed war-torn countries naming Nigerian and Ghana, of which it could be only TB Joshua’s country Nigeria since it is the other of the two which is war torn.

“I really don’t understand why scores of people are putting their faith on foreign preachers. They are having to raise a lot of money to visit them when in Zimbabwe we are blessed with anointed people of God who are able to do even greater things,” she said.

Grace Mugabe’s comments come at a time when scores of Zimbabweans, including Cabinet ministers, are flock¬ing to countries such as Ghana and Nigeria seeking divine intervention.

“It doesn’t matter which denomina¬tion you belong to, we are all seeking one God. Believe in our prophets and stop wasting money visiting faraway countries. In Zimbabwe we have people who, through prayer, can heal you from your sickness and restore your broken marriage.

“People have this misconception that Zimbabweans do not know how to pray. Little do they know that we have a lot of anointed people who are able to help us because they know the environ¬ment that we are operating under. A closer look at the countries which are being thronged by our people reveals that they are torn by war and hunger,” she said.

Grace Mugabe told the thousands of people who attended the last day of the conference, organised by Prophetess Eunor Guti of the Zimbabwe Assem¬blies of God, that she also seeks the help of local spiritual leaders.

“I might be Grace Mugabe of Zimbabwe, but I cannot do it all on my own,” she said to wild applause.

“I go to Amai Guti seeking guid¬ance and she prays for me. The prayers enable me to keep my family and life together. I see God’s power in her and I have come to realise that God gives you people in your life to do certain tasks that you cannot do on your own because they are anointed in that area.

“There is no point in trying to com¬pete or badmouth the anointed because theirs is a gift from God.”
Amai Mugabe added that she also believes in fasting as she seeks God.

“Prayer and fasting have sustained me and I have also learnt to ask God for wisdom every day.

“The book of James 1:5 says: ‘If any of you lack wisdom, let them ask of God, who gives to all men liberally and upbraids not, and it shall be given him.’

“To know what to do require wis¬dom that comes from God,” she said.

The conference ran from November 8-10 and attracted dele¬gates from more than 182 countries. [indepthafrica]