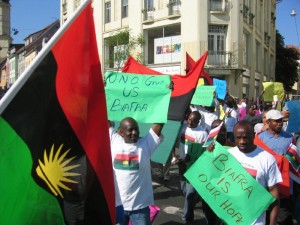 At least 15 persons, including a woman suspected to be members of Movement for the Actualization of the Sovereign State of Biafra, MASSOB, were at the weekend arrested by the police in Enugu.

The police said the suspected MASSOB members were arrested following security reports that they were plotting to cause mayhem in the state, and they were arrested in Ezeagu Local Government Area while holding an alleged secret meeting.

According to a statement by the state Police Public Relations Officer, Mr. Ebere Amaraizu who confirmed the arrest, their arrest was as a “result of security report received that they were holding their meeting on how to strategize to perfect their operations.”

He said that investigation into the incident was already in progress, adding that the suspects were helping the police in their investigation and would soon appear in court.