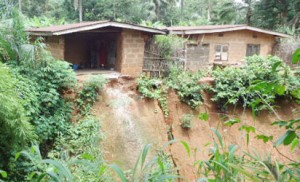 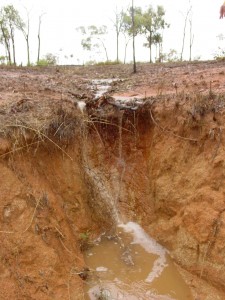 Mr. Ignatius Igwemadu from Urumabiam, Egbema Ozubulu in Ekwusigo and his brother allegedly died when their bungalow fell into the gully erosion, which was first noticed in the village about five years ago.

Other houses swallowed by the erosion were at Egbema and Uamuokpanilo in Ozubulu, as well as in Ibollo Oraifite.

The member representing Ekwusigo constituency in Anambra State House of Assembly, Mr. Pauli Onyeka, who conducted newsmen round some of the erosion sites in the constituency, weekend, said the economy of his constituents had adversely been affected as many farmlands had been washed away and roads cut off.

According to him each of the four communities of Ozubulu, Oraifite, Ichi and Ihembosi that make up the constituency has at least 10 active erosion sites threatening people’s homes and farmlands.

Some houses currently under threat of the gully erosion, include those belonging to the families of Asuzu, whose six-bedroom bungalow completed recently had been abandoned and Onyejiaka Anazodo, whose family members are now living in fear in their one–storey building at Ibollo Oraifite.

Mr Onyeka, who lamented the level of devastation in the area, called on the state government to consider Ekwusigo a priority area when issues of erosion were discussed at the state and national levels.

“Before now, every attention as far as the issue of gully erosion was concerned, was focused on Oko, Agulu and Nanka axis when we have more devastating erosion sites in Ekwusigo. We want Ekwusigo to be declared erosion disaster area. Some casualties had been recorded and we don’t know who would be the next victim.