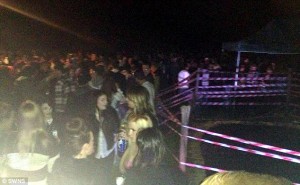 For those who are fond of advertising everything possible – their jobs, businesses, private lives – online, especially Facebook, this story might be of interest. Ollie Boorman, a computer engineer who lives in Hertfordshire , UK advertised his 21st birthday party online to try and boost the number of guests attracted more than 1,000 guests.

Ollie’s party spiralled out of control as hundreds of strangers descended on the quiet road in Tewin, Hertfordshire that police were called in just three hours after the bash started as neighbours complained of thefts, smashed cars and fighting.

The 21-year-old was then charged and admitted for causing a public nuisance at a court hearing on Friday. Boorman had expected about 200 people to turn up after he publicised the event online but was stunned when five times as many arrived at his parents home in Tewin, Hertfordshire.

As a matter of fact, Britain’s Got Talent judge Alesha Dixon was one of those who turned up to congratulate Boorman, who is a friend of her family.

Fayemi: Like Nigeria, Most Countries Are Products Of Involuntary Mergers