There was drama in Zimbabwe on Monday morning when a married man was caught with a lover after taking advantage of his wife’s one night absence. 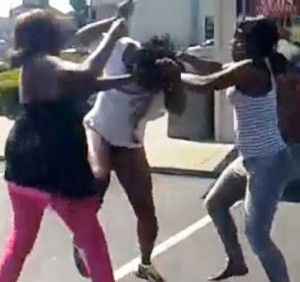 Leonard Gandari’s wife had gone to Banket where she was attending a funeral and Leonard deemed that as a golden opportunity to ‘import’ a ‘prostitute’ into their matrimonial house in Zengeza 4, in the presence of his wife’s siblings. The lover was identified as Memory Mupindu (25) and she was stripped by angry neighbours after the couple overslept and Leonard was late to ‘deport’ his catch before co-tenants and his wife’s siblings had woken up. Memory refused to be labeled a prostitute arguing that she had been made to believe that Leonard was single hence she slept comfortably up to the time when neighbours were sweeping their yards. “I’m not a prostitute but we were in love. We met two weeks ago and he told me that he was not married and he stays with his sisters. We came together yesterday night without any idea that things will generate into such chaos. I am in form four at herentals college in Chitungwiza,” said the woman as tears rolled down her cheeks. Leonard could not give his side of the story as he fled. Neighbours saw Memory trying to scale over the pre-cast wall in a bid to escape after realising that she had overslept. She was however, unlucky and was thoroughly beaten up and stripped. “It is the wife’s young sister who smelt a rat and woke up and Memory sensed danger and tried to escape but in vain,” narrated one of the neighbours. Angry residents went on to call Leonard’s wife identified as Mirriam Chinduta who arrived at the scene and found the scene still ‘fresh’. The wife broke into the house to find the alleged prostitute on her sofas. Residents were bitter that Leonard abuses his wife by regularly assaulting her which he confirmed by again assaulting her after she confronted him over the issue. Mirriam reportedly sought refuge at a nearby house in fear of being attacked. The seemingly too violent Leonard tried to attack the news crew but shied away from the lenses. Fearing the mob, largely made up of the fairer sex, Leonard locked himself in the house, leaving his mistress to face the music. A close source said Leonard sneaked the O-Level student into the house around 9pm and at around 11pm, his wife’s sister and children heard voices in the bedroom. “We were seated in the house and at around 11pm we heard voices and sent in his young child who told us that there was a lady on his bed. We went in but we couldn’t find her because she was hiding. We woke up at around 4am and sat in the dining room and he (Leonard) was just milling around and he could not go to work, which made us suspicious and we guarded the gate. Later we heard our neighbour screaming that there was someone on the wall and we saw her and caught her,” revealed the mole.