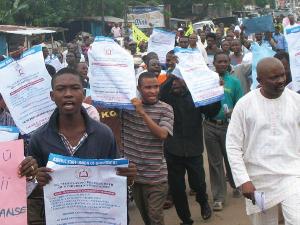 At least three houses of top government officials were on Tuesday burnt in Plateau State as other workers joined striking local government workers in a solidarity strike.

The national secretariats of the Nigeria Labour Congress, NLC, and Trade Union Congress, TUC, had directed other labour unions to join the local government workers in a solidarity strike if the state government failed to resolve the trade the dispute which had dragged for about seven months within 10 days. The ultimatum expired on Monday.

Angry youth were said to have barricaded roads in Mangu, Pankshin and Langtang North local government areas to protest what they called government’s refusal to heed appeals to end the impasse.

The protest in Langtang North was alleged to have been hijacked by hoodlums leading to the burning of the residences of the Management Committee Chairman of the local government, Mr. Namaan Darko, that of a member of Plateau State House of Assembly, Mrs. Joyce Rannap and the Commissioner for Youth, Mr. Lohfa Boko.

Although the state government obtained an injunction from National Industrial Court Abuja restraining the labour from going on with the strike, the injunction did not appear to have worked as other workers heeded the calls of their national bodies to join the strike paralyzing activities in most offices.

Banks as well as state and federal offices were shut as workers complied with the directive.

The state government however says labour remains a partner in progress for the development of the state despite the situation.

Director of Research and Documentation in the Governor’s Office, Mr Chris Kwaja told journalists on Monday that while the government takes exception to violence and the harassment of citizens it would continue to accord workers’ welfare priority.

He dismissed the statement credited to a top labour leader describing Governor Jang as a lover of crisis saying the governor had done a lot to show that he is a friend of workers and has their welfare at heart.

He urged labour to respect the rule of law by obeying the injunction from the National Industrial Court and return to work while steps are taken to resolve the matter. [VN]