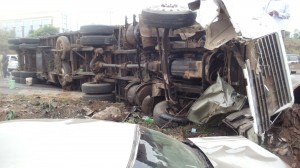 At least ten persons, lost their lives while eight others sustained injuries in a motor accident along Bauchi-Gombe Road near Alkaleri Local Government Area of Bauchi State Saturday.

According to Acting Sector Commander of the Federal Road Safety Commission, FRSC, Mahmud Kachalla, the accident occurred between Tsohuwar Gwaram village and Alkaleri town and it involved 18 people in a Golf car, a Honda car and one motorcycle.

“Among the 10 people that lost their lives were five adult females, three adult males, a boy and a girl. Out of the number, eight sustained injuries and they include five male adult, a female adult and two boys,” Kachalla said.

The accident Kachalla said was caused by over-speeding and overloading, adding that the Golf car had eight people coming from a condolence visit to Jigawa State and on their way to Alkaleri, they had a head-on collision with the Honda car.

The Commander said the FRSC personnel stationed in Alkaleri rescued the injured victims and took them to Alkaleri General Hospital for treatment.

He therefore advised motorists to always obey traffic regulations to reduce accident on the highways especially during this festive period when there is mass movement of people.