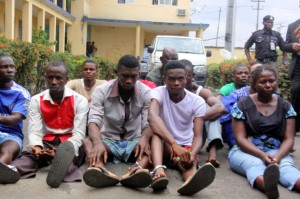 The trial of the 13 people arrested for the October 5th murder of four students of the University of Port Harcourt suffered a setback on Thursday December 20th as the proceedings were stalled due to the failure of prison officials to produce the suspects in court.

At the resumed hearing, the prosecutor told the court that the accused persons were in the court cell, but could not be brought in because of shortage of prison personnel! The prosecutor also said he was yet to receive any advice on the matter from the Director of Public prosecution to whom the case file was referred.

The case was therefore adjourned till February 28, 2013. The suspects were remanded in prison. Meanwhile the police has arraigned three more persons for the brutal killing of Tekena, Iloyd, Ugonna and Chiadika. They are: Fine bone Jeffrey (23), Joshua Ekpe (27), and Abang Cyril (27), all arraigned on a five-count charge of conspiracy and murder

Also, the Port Harcourt NBA chapter, who sent representatives to the trial, demanded access to the case file and the court ordered the release of the files to them.