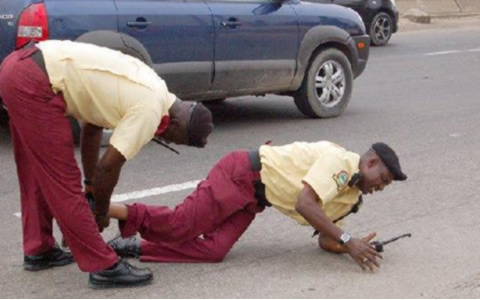 37-year-old Kingsley Ighalo, an alleged army impostor had been arraigned on a five-count charge before Magistrate Yetunde Pinhero at the Task Force on Environmental and Special Offences Magistrate Court, Alausa, Ikeja for assaulting Ayinla Adeola and Adeshina Akinwunmi who are officials of the Lagos State Traffic Management Authority, LASTMA, at Bolade area of the state while on duty, the charges to which he pleaded not guilty.

Reports say Ighalo, who was driving a commercial bus with registration number XV 793 SMK, allegedly obstructed the free flow of traffic by picking and dropping passengers at will on the main carriage of Abeokuta Expressway and was later intercepted by the two officers at Bolade area of Oshodi. As at the time of arrest, the suspect was said to be wearing an army camouflage shirt.

He was asked to drive his bus to the LASTMA Headquarters, Oshodi escorted by officials. In order to evade arrest however, Ighalo drove recklessly and dangerously towards the direction of the Nigerian Army Arena Shopping Complex gate and introduced himself as an officer of the Nigerian Army and thereby requested for help.

The driver together with the military officers attached to the gate of the shopping complex assaulted and inflicted serious head injuries on the LASTMA officers who were later released through the intervention of senior ranks of the military who also detected and confirmed that the driver was an impostor when he could not answer some questions related to military code of conduct and thereby handed him over to the LASTMA police for further investigation.

While the case was adjourned till 14 December, 2012 for proper trial, the presiding Magistrate, granted him bail in the sum of N200,000 with two sureties and also directed that the sureties must show evidence of tax payment to the Lagos State government, must not be below 40years of age, resident of the state and must be gainfully employed with proof of valid identity card.