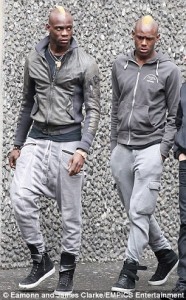 Enoch Barwuah, 20, who had trials with Stoke City and Sunderland before signing for Salford City last month, was held after a brawl at a bar and kept in custody until his appearance before a judge.

The court heard how he had been attacked as he drank in a bar in Brescia with his sister Abigail by a man who ripped his shirt but Barwuah then turned on police who had been called by the owner.

Officers said they found him in the street shirtless and barefooted and when they approached they were kicked and punched, while their squad car was also damaged in the incident.

The court bailed Barwuah to his home address in Brescia until January 3, when he will have a fast track trial accused of a assault and resisting arrest. At his hearing he apologised and said his reactions had been ‘unjustified’ but he had become concerned after his sister ‘felt ill’ during the attack.

Barwuah is Balotelli’s younger brother and apart from Abigail he also has a sister Angel – they remained with his natural parents while he was adopted as a baby by a wealthy Italian couple.