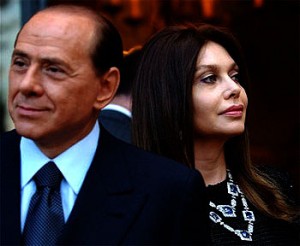 The divorce settlement between former Italian premier, Silvio Berlusconi and his second wife Veronica Lario, has been made public by an Italian newspaper which revealed that Berlusconi has been mandated to pay a monthly alimony of €3 million but gets to keep their estate.

We also gathered that all the paperwork was filed Christmas Day at Milan’s tribunal.

Lario, who met Berlusconi in a dressing room in 1980 after he saw her perform in a Milan theatre and got married to him 10-years later, cited the AC Milan owner’s unflinching desire for younger women as reason for the divorce.

The estranged couple have three grown children together and presently, the 76-year-old Berlusconi is currently dating a woman nearly 50 years his junior.