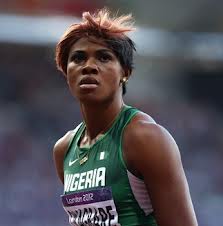 For those who might have forgotten her, she is one particular athlete on whom a lot of Nigerians banked to get the country a medal at this year’s Olympic Games. However, she flopped enormously – just like the rest of her colleagues who represented the country at the Olympics.

But right now, the Nigerian leading women’s sprinter, Blessing Okagbare has lauded the decision of the National Sports Commission, NSC, to throw open the National Sports Festival from 2014 in Calabar. She stated that an open participation will bring glamour to the fiesta. However, she declared not every elite athlete will be keen to participate.

Her words: “For instance if this year’s Festival was open, I couldn’t have participated. This is because I had a hectic year and I needed the break. So I guess that is the way it will be for every other athlete,” said Okagbare.

However, the athlete revealed that she declared that she has put behind her the disappointment of the London 2012 Olympics and was getting ready for the challenges of 2013. “I have started training and I hope to work harder to make amends.”