In what might be a stark reminder that this year’s Christmas is going to be anything but peaceful, suicide bombers have attacked the offices of telecommunications giants, Airtel and MTN in Kano state. 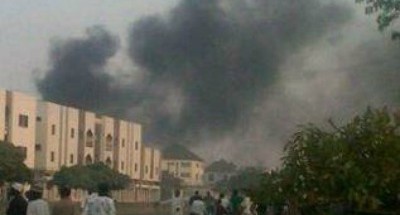 A source close to joint security forces in the state, disclosed that one suicide bomber hit the premises of Airtel on Mallam Kato Square, killing one unidentified person.

“Its impact has affected Singer market which has now been closed down by the joint security forces” he added.

Sources also confirmed that about 30 minutes after the Airtel attack, another suicide bomber hit the MTN headquarters at Post Office Road in the state.

The number of casualty at MTN’s office is yet to be confirmed but it was certain that staff and security officials on night shift are still in the office when the office was hit by the suicide bomber.

“There may be casualties, but at the moment I cannot disclose to you how many because we are still investigating the matter.”

The area is now completely surrounded by the Joint Task Force (JTF) and movement is  restricted in the environ.