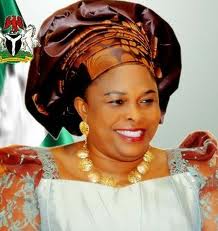 Nigerian First Lady, Dame Patience Jonathan, it has been gathered, will on Saturday be honoured with a honorary fellowship award by the Auchi Polytechnic during the institution’s 20th convocation.

This was made known in a statement by the polytechnic spokesman, Mustapha Oshiobugie, released on Tuesday in Auchi, Edo. According to the statement, a former Federal Commissioner of Information and an elder statesman, Edwin Clark, will also be conferred with a similar award in recognition of his contributions in his fields of endeavour.

Also, the statement said Mr. Clark was pivotal to the upgrading of the polytechnic to its present status: “His immense contribution to the upgrading of the Midwest Technical College to Auchi Polytechnic made it what it is today… Chief Clark has also contributed greatly to education development of the country as a teacher and commissioner,” it noted. It said the the occasion would also be used to honour a former Minister of Education, Aishetu Dukku.