Ever since her mention in the recent Forbes Africa feature as one of the richest women in Africa, Nigerian billionaire oil tycoon, Fashion designer and philanthropist, Folorunsho Alakija has captured the attention of many as someone to watch out for. 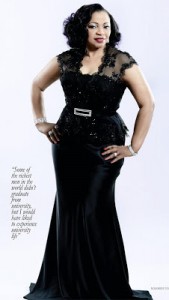 Now, another online publication, Ventures Africa has ranked her as the World’s Richest Black Woman. According to the report, she has ousted Oprah Winfrey from the position.

Ventures Africaclaims that contrary to  the Forbes Magazine ranking which pegs her net worth at only $600 million, Alakija is actually worth at least $3.3 billion. She earned most of her wealth from the oil and gas sector.

Alakija, 61, started out her professional career in the mid 70s as a secretary at the now defunct International Merchant Bank of Nigeria, one of the country’s earliest investment banks.

In the early 80s, she quit her job and went on to study Fashion design in England, returning to Nigeria shortly afterwards to start Supreme Stitches, a premium Nigerian fashion label which catered exclusively to upscale clientele.

In May 1993 Alakija applied for an allocation of an Oil Prospecting License (OPL). The license to explore for oil on a 617,000 acre block – (now referred to as OPL 216) was granted to Alakija’s company, Famfa Limited.

In September 1996, she entered into a joint venture agreement with Star Deep Water Petroleum Limited (a wholly-owned subsidiary of Texaco) and appointed the company as a technical adviser for the exploration of the license, transferring 40 percent of her 100 percent stake to Star Deep. Subsequently, Star Deep sold off 8 percent of its stake in OPL 216 to Petrobas, a Brazilian company. Folorunsho Alakija and her family owned 60 percent.

The Ventures Africa report also claimed that Alakija has a real estate portfolio worth over $100 million. Earlier this year, Nigerian and British media announced that Alakija acquired a property at One Hyde Park for $102 million.

She owns a Bombardier Global Express 6000 which she bought earlier this year for a reported $46 million. She is the founder of the Rose of Sharon foundation, a Christian-based charity which gives out small grants to widows.

Alakija is married to Modupe Alakija and they have four grown-up sons together. She also has a grandchild from her first son. Modupe Alakija, her husband is the Chairman of Famfa Oil. Her sons run the company.