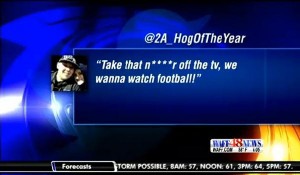 How dare you insult the POUS on social media, especially when he’s mourning?

A North Alabama football player recently lost his place in the team, and probably his career, no thanks to his explicit message.

During President Barack Obama’s address on the Newtown, Connecticut shooting on Sunday night, North Alabama player Bradley Patterson sent out a racist tweet directed towards him.

“Take that [expletive] off the tv, we wanna watch football!” Patterson, whose account has since been deleted, tweeted.

Representatives from the school later confirmed Bradley had been kicked off the team.

“As Obama mournfully spoke about the 26 victims of an attack on an elementary school, Patterson was apparently upset that NBC decided to show the president on its main network and temporarily move the Patriots-49ers game to CNBC and the NBC Sports Network. And he thought this was the way to express it, according to a story on AL.com:

“North Alabama was quick to respond, according to AL.com. Patterson, humorously described as an “uninvited walk-on long snapper” by a school official in the article, was quickly booted from the team, which athletic director Mark Linder announced on Twitter,” Yahoo News Reports.